Schwa vowels can be puzzling to children and adults at first. Breaking down schwa sounds by groups can be helpful. Starting with schwa a sounds is one of the common unstressed syllables in the English language.  With this “How to Teach Schwa Tutorial”, your students will be able to pick this unstressed syllable up rather easily.

One of my few memories of my early elementary years is learning about schwa. Although I was an avid reader, I remember struggling to wrap my head around this particular phonics lesson. While this may seem like one of the most confusing sounds to teach, there are some tips to help and things I wish my teacher in 1st and 2nd grade had tried.

I suggest moving from the big picture of stress and accent and what a schwa is to more specific spelling patterns and examples.

I want to be a schwa. It’s never stressed! 🙂 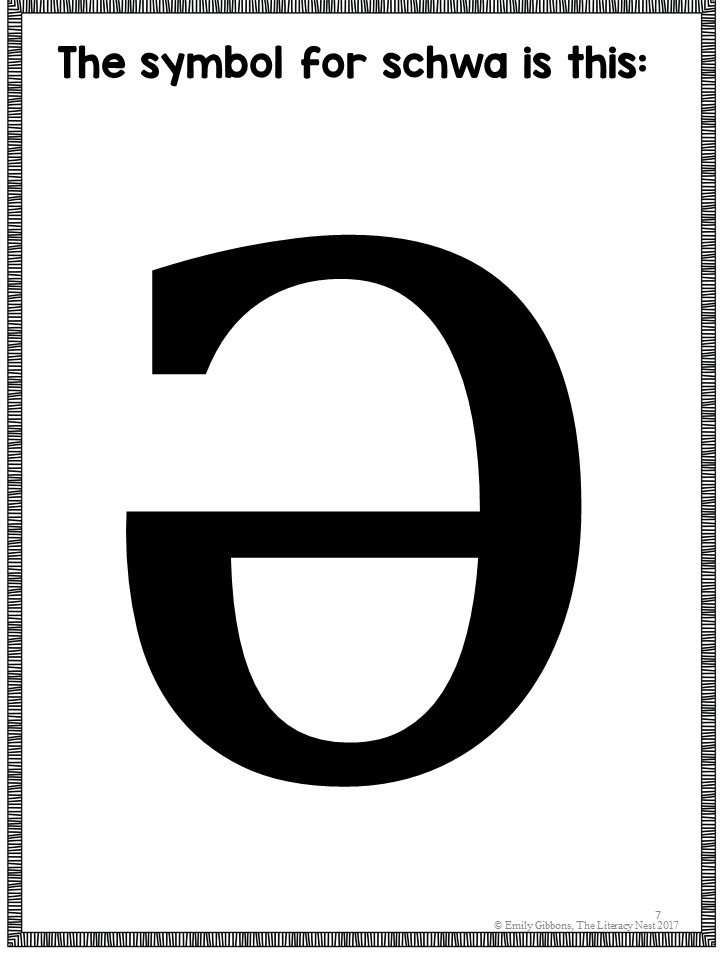 The schwa symbol looks like an upside-down e. It looks like a lazy e is taking a rest. The word schwa comes from the Hebrew word “shva” which represents the “eh”sound in Hebrew. Although this is the origin of the word schwa, the Schwa sound in English typically sounds like “uh” or “ih” or something in between. The term schwa was first used by German linguists in the 19th century. 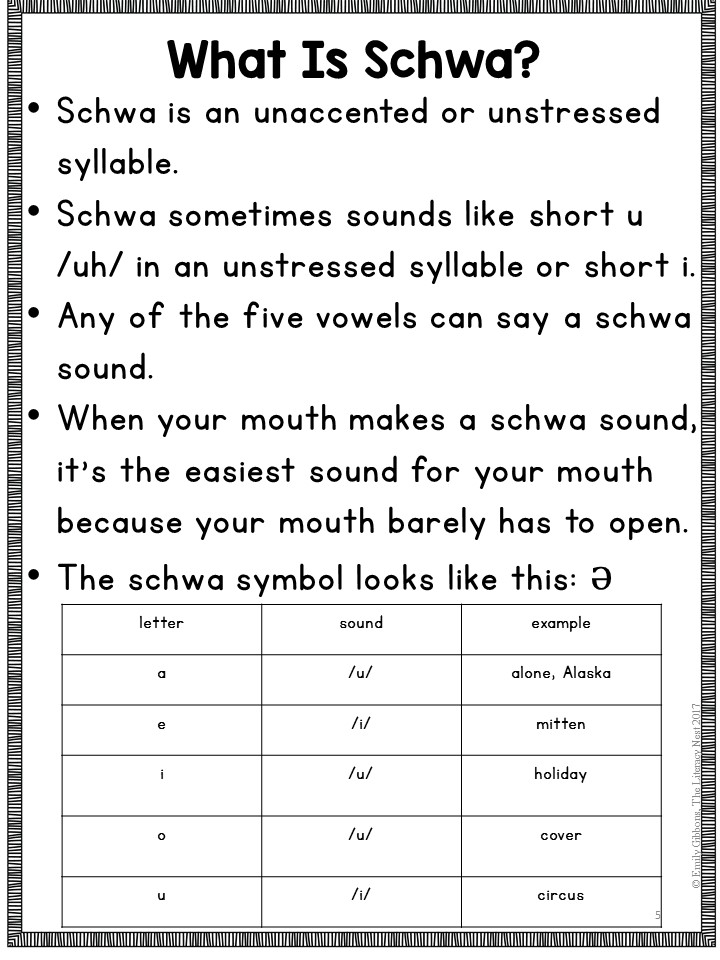 Practical Teaching Tips for Schwa A

While we don’t need to teach our students iambic pentameter, we do want to model the difference between stressed and unstressed syllables.

Call It To Dinner

There is a little trick called “Call the dog” or “Call it to dinner” to hear the stress. If I were to call the word “alike” to dinner, I would call out “a-LIKE!” I would move the first felt square down a row to show the unstressed schwa a sound. Often students need to hear it model both correctly and incorrectly stressed in order to be able to pick out what sounds right.

The nice thing about starting with schwa A is that it is relatively predictable and consistent. Other schwa vowels tend to be less regular. Look for progress not perfection. I have a student for whom schwa is her “worst enemy”. If she is Batman, schwa is Joker. If she is Superman, schwa is kryptonite. If she were a Smurf, schwa would be Gargamel. But for all her fist shaking and joking, she knows that she has the upper hand, by learning as much as she can about schwa. We acknowledge that schwa is difficult and embrace the patterns for reading and spelling and concentrate our efforts on becoming proficient with strategies and tools for tackling one of the most challenging aspects of English spelling.

If you are seeking resources, this Schwa A resource is so helpful. I also have a FREE schwa game with fun pizza theme! Who doesn’t love pizza? 🙂 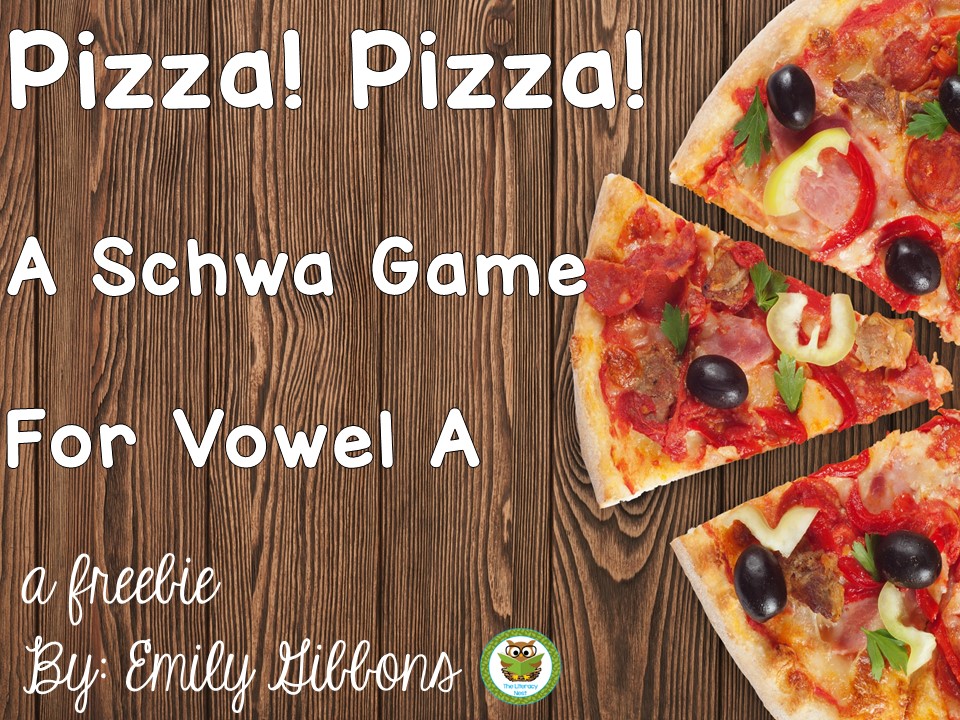 Read Part 2 of this blog post! Tips for Teaching Other Schwa Vowels.

In it, I will go into more reading and spelling strategies for unstressed syllables.

Watch “What is Schwa?” from Laughing Ogre Press for a helpful explanation! 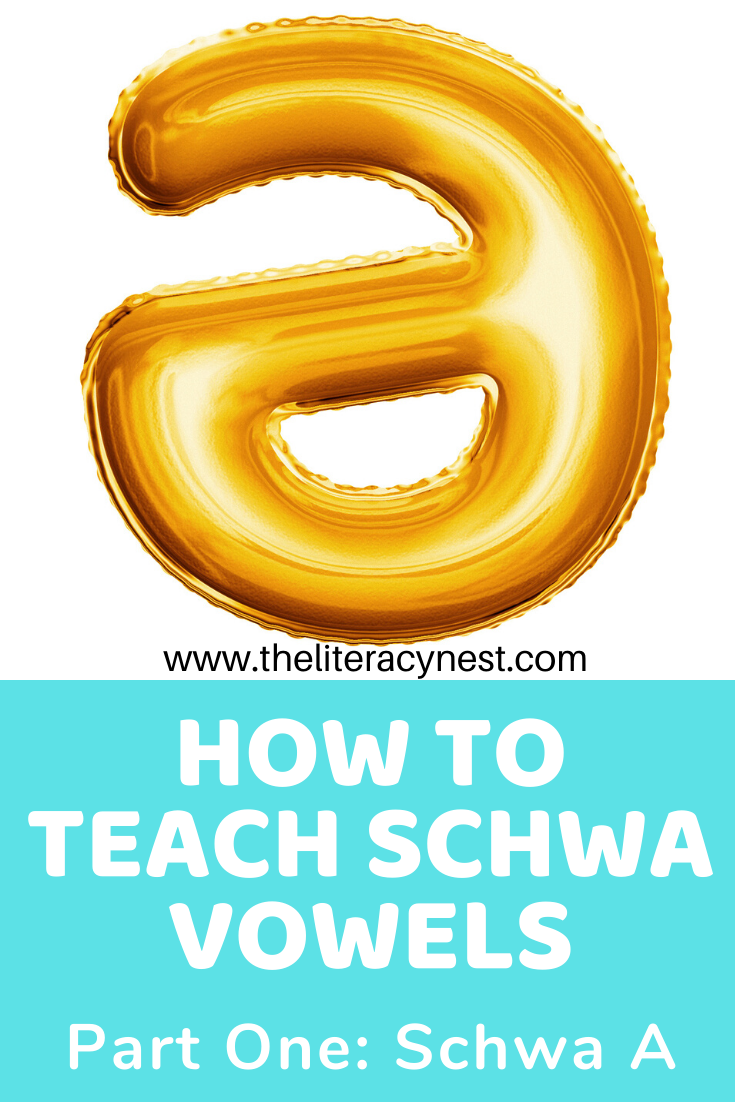 Are you seeking resources for teaching Schwa A? This schwa sounds resource has lots of activities to save you time!

Tyler’s classroom teacher shows you his latest writing assignment. He scored 100% on his latest posttest on structured literacy concepts, but his writing sample is full of errors. Despite all the practice on the k/ck spelling rule, he has not applied it here even once. You pop into Camryn’s classroom during reading time and despite…

In Part 1 of Teaching Schwa Vowels, we talked about strategies for learning schwa a. Schwa a is a great place to introduce the schwa vowel because it is predictable in its location and spelling. In addition, this post offers a lot of suggestions about teaching children about accent and stress which is a necessary…

As teachers of structured literacy, we soon discover that English is more logical than it appears at first, but that isn’t always the popular opinion out there. This article details several resources WHY English isn’t crazy.

One challenge that structured literacy practitioners face in their work is isolation and frustration with how to share their knowledge in a way that will be well received. While this is a bigger challenge for those working in a school setting, the issue may also arise for those in private practice when communicating with other…

Teaching to mastery is one of the most important considerations when teaching your students with dyslexia. Striving readers and writers very often find the class and instruction moving forward before they have had a chance to master new concepts. This results in learning gaps. When I encountered this in pupils at school, I would describe…