Let’s talk about about using mentor texts to analyze characters, shall we?

Characters reveal themselves through their words, actions, and feelings.  Strategic readers gather clues to a character’s personality by tuning in to what the character says, thinks, and does.  We want students to not only be able to identify the traits of a character, but also be able to support their thinking with evidence from the text.  As students read they must begin to examine the following:

One book that I love to read when introducing this skill is Keep the Lights Burning Abby.

It’s a true story about a young girl who must keep the lighthouse lamps lit during a terrible winter storm.  Many lives depend on Abbie.  While her father is away and her mother is sick, Abbie is left to care for her mother, two younger sisters, their chickens, and the lighthouse.

Here is a graphic organizer that I created for this story. 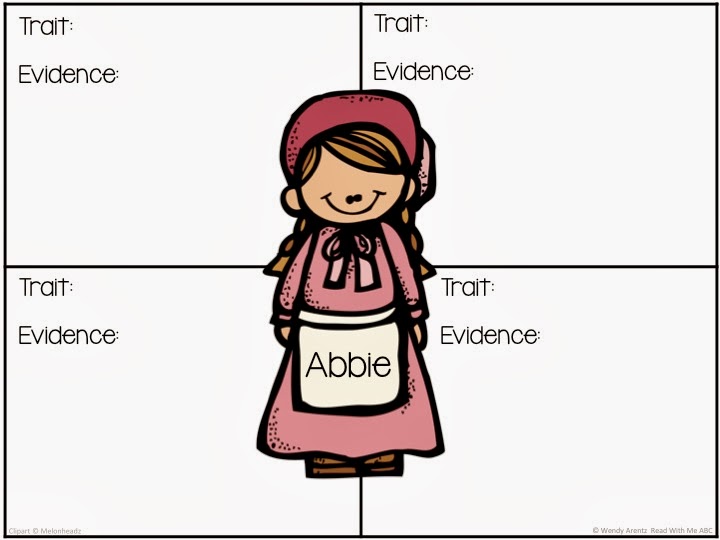 I’ve listed a few possible character  traits that could be used to describe Abbie below.

Character trait: Fearful
Evidence: Abbie says that she is afraid to care for the lighthouse on her own.

In my experience with teaching character traits, students sometimes lack the vocabulary to ‘label’ the traits that they see in a character.  Thus, their descriptions are vague.  I’ve included a list of character traits that students can use as they begin to identify them.  You can download it {free} by clicking on the image below.

I’d love to hear your thoughts on Keep the Lights Burning, Abbie and how you teach character analysis.  Please share your ideas in the comments below or link up a post of your own.

Please use the green Mentor Monday button at the beginning of your post to make it easily recognizable on all link-ups.  Also, please name your post Mentor Monday Linky 3/10/14: Character Analysis.  You’ll find the link-up at the end of this post. It will stay open until 11:30 P.M.  Wednesday night 3/12/14.

I’m so excited to read your posts to learn about some other great picture books.  Thank you for visiting today!