What’s the difference between a phoneme, a grapheme, a morpheme?

The science of teaching reading can sound like a foreign language, especially when you are first learning about Orton-Gillingham or Structured Literacy instruction. While you will likely be talking about digraphs and trigraphs, and blends before you know it, some of the specialized vocabulary can be a bit confusing.

A phoneme is the smallest unit of sound.  A phoneme is the smallest unit of spoken sound and is often the one thing that distinguishes one word from another. For example, cat and rat are only differentiated by the first phoneme. In many cases, a single letter represents a single phoneme, but in most cases, there are multiple ways of representing a particular phoneme in English spelling. And the case of the letter x, it is actually comprised of two phonemes /k/ & /s/.

Generally, the accepted belief is that there are 44 phonemes in English. This includes short vowel sounds, long vowel sounds, digraph sounds such as /sh/, /th/ (voiced and unvoiced) and /ch/, and single consonant sounds. Most people consider the dipthong sounds /oy/ and /ou/ to be single phonemes as well. Linguistically, /ng/ and /ar/, /or/, /er/, /ear/, /oar/, and schwa are also phonemes.

So, a single phoneme such as /n/ may be represented by letters in numerous different ways such as n, nn, kn, gn, or pn. Phonemes can be indicated through the International phonemic alphabet or by indicating a sound between slanted lines.

Phonemic awareness, the ability to hear and manipulate individual sounds is foundational to the development of literacy. The ability for your students to segment and differentiate phonemes is crucial for accurate decoding, encoding, and understanding of speech. Meaning is very much affected by differences in words of a single phoneme which may differ only by whether it is voiced or unvoiced.

In linguistics, a grapheme is the smallest unit of a written language whether or not it carries meaning or corresponds to a single phoneme. In different languages a grapheme may represent a syllable or unit of meaning.

Graphemes can include other printed symbols such as punctuation marks. In this example, the grapheme <x> represents the phonemes /k//s/ while a single character in Japanese may represent a syllable. Different types/fonts of a single letter are considered the same grapheme. A basic alphabetic understanding and rapid recognition is a necessary first step to learning to read. Your student’s ability to quickly, accurately and easily write graphemes is necessary to fluent writing and spelling.

When we are speaking purely about English, you will often see another definition of grapheme. In this case a grapheme is a letter or group of letters that represent a single phoneme. This is a term used more or less synonymously with phonogram. There are often numerous graphemes (or phonograms) that can represent a single phoneme. For example, the /ā/ sound is a phoneme that can be represented by numerous graphemes including ai, ay, ey, ei, eigh, a-e.

To make things even more confusing for young learners, a single grapheme such as ea may represent three different phonemes /ē/, /ā/, or /ĕ/. While English has 26 letters and 44 phonemes, there are approximately 250 graphemes.

Perhaps the most neglected term and concept in the study of teaching reading is the morpheme. A morpheme is the smallest unit of meaning that cannot be further divided. So, a base word might be a morpheme, but a suffix or prefix or root also represents a morpheme.  For example, the word red is a single morpheme, but the word unpredictable is made of the morphemes un + pre + dict + able. While none of these units stand alone as words, they are the smallest units of meaning.

Morphemes can vary tremendously in length from a single letter such as the prefix a- to a place name derived from another language such as Massachusetts, which in English represents a single morpheme. As students move into reading and writing more sophisticated academic language, the concept of morphemes becomes increasingly important to their decoding and their spelling as well as their ability to infer meanings of new vocabulary. The root of a word makes tremendous differences in spelling words with the -ion suffix for instance.

While linguists can spend hours debating the precision of certain aspects of morphology such as whether the word dog is made of one morpheme or 2 (the base word and the absence of a suffix or nul), the purpose of our pursuit of this study is far from a purely cognitive exercise. The reason for building this understanding is clear. English is by its nature a morpho-phonemic language. Not only is it phonemic in nature, but morphology also has a crucial role to play as well.

In addressing both aspects of language learning, give your students the tools to understand the challenges of words that change pronunciation with the application of affixes such as clean and cleanse or sign and signature. Try to help them to understand seemingly random spellings like to and two when they learn about the relationship of two to twenty and twin and twelve.

Rather than our language being random and illogical and full of exceptions, English has a deep and complex logic to its orthography that your students can learn to use.

Knowledge of how English works extends beyond the 44 phonemes or the 26 letters of the alphabet to a much more sophisticated understanding about how words are made and broken. 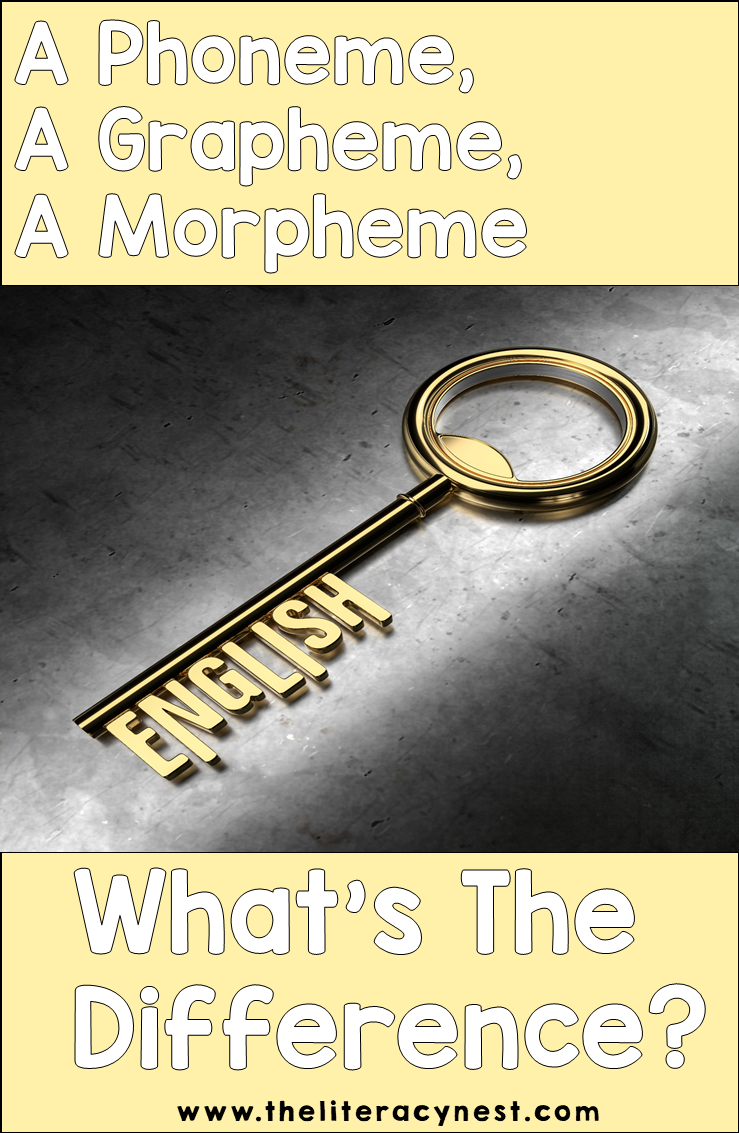 How is this useful for your students?

Your students benefit when we are transparent and give them the tools and practice to think critically and analytically about our language. And it all begins with some shared understandings such as these terms. You can share the definitions in a reference binder like the Spelling Concepts and Strategies binder. You can learn more about it in this video, Spelling Concepts and Strategies Binder for Orton-GIllingham Lessons.  *Be sure to subscribe to you can receive notifications when I create a new video.

Did you hear the news?

Are you seeking resources for dyslexia intervention and Orton-Gillingham lessons? Find them on sale!

Thank you for stopping by my blog today!

(This post contains affiliate links.) Hi Everyone! A few weeks ago I was on Instagram and saw photos of teachers using light boxes. The Heidi Swapp Light Box is the cutest little tabletop or desktop invention. Immediately I thought, “Hmmm. I need one of those.” What for might you ask? A few ideas ran…

This post about organizing teacher materials contains affiliate links. Have you just finished your OG training or you’re in the middle of a program? Then this series is for you! I’ve spent the past month chatting with fellow Orton-Gillingham-trained teachers and compiled some tips for you to use right away. I’m going to break this…

(This post uses affiliate links.)   Hi everyone! I’m back with some tips for using Orton-Gillingham materials. You’ve made a big investment and want to implement them well. You may notice that the volume of printable materials needed really does a number on your ink supply. Or perhaps there are things you’d love to laminate,…

Teaching to mastery is one of the most important considerations when teaching your students with dyslexia. Striving readers and writers very often find the class and instruction moving forward before they have had a chance to master new concepts. This results in learning gaps. When I encountered this in pupils at school, I would describe…