You may think of phonemic and phonological awareness as something for the primary grades, for early readers or non-readers. If you teach older struggling readers or language arts classes for upper elementary or middle school, you may not find phonemic awareness tasks among the materials at your disposal. However, for a lot of readers that struggle or are reluctant readers, difficulties with phonemic awareness may underlie many of their struggles.

Phonemic and phonological awareness are key to the development of fluency and automaticity as words that are instantly recognized become part of a reader’s repertoire. It is important not only to continue to teach these skills for students that struggle, but to ensure that we are teaching to mastery and automaticity for all students.

What does a student with phonemic awareness struggles look like?

If an older student has a phonological deficit, you may observe certain characteristics. The older reader may struggle with fluency. This reader may appear to read at approximately grade level, but they avoid reading. You often see them referred to as a reluctant reader. You are likely to see spelling struggles with these students as well. You may see them referred to as primarily “sight word readers”.

Where do we start?

Your assessment of older struggling readers is one of your most important tools. Often, these learners are complex and have a tangled web of understandings. Careful assessment can help you untangle this web and find the missing connections. The PAST is an excellent starting place for looking at phonemic awareness. Kilpatrick’s PAST is particularly valuable because it analyzes a student’s automaticity and fluency with these tasks, not just their accuracy. Older students can sometimes complete phonemic awareness tasks backwards by using their knowledge of spelling patterns and written words. You may see this in students who are highly accurate with these tasks, but slow. They are likely struggling far more with phonological awareness than you may realize, but they have adapted. Those skills are still very important.

Using an assessment of sounds and words in isolation, particularly one that also assesses nonsense words can be a good way to uncover decoding and encoding difficulties. I like the Gallistel-Ellis test of encoding and decoding. I have assessed many upper elementary reluctant readers who can read and comprehend grade level material; but are unable to read cvc nonsense words in isolation. They either know a word, or don’t know it. They lack the skills to take apart and solve an unknown word.

So where can you turn for more information about phonemic awareness and older students? 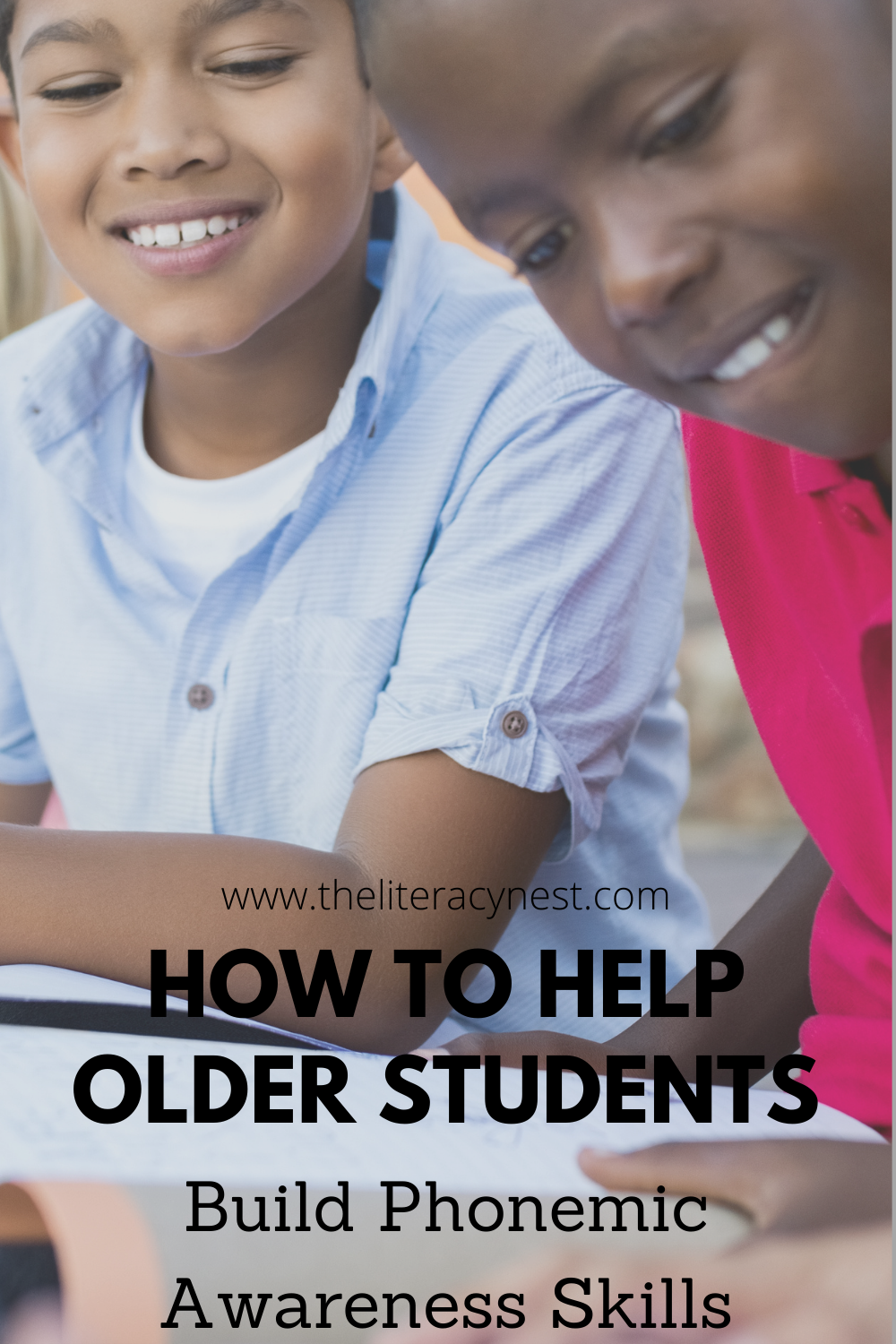 Did you happen to see the post on helping younger students with phonemic awareness? You’ll find lots of helpful tips if you work with younger kids.

Thank you for stopping by today!

Phonemic awareness might be one of the most important, most talked about, and most misunderstood aspects of literacy. Some of that confusion stems from the similarities and differences between phonological and phonemic Awareness. They are very much related, but not interchangeable. If Phonological Awareness is an umbrella that covers skills, those skills include hearing words…

Have you ever noticed students having difficulty not only with visually similar letters such as b and d, but also having difficulty with letter sounds that seem more surprising such as /b/ & /p/ or /k/ & /g/? For mature language learners, it is sometimes challenging trying to find out what is causing the difficulty….

Not too long ago, I shared 6 of my favorite read aloud books to promote phonological awareness. I promised that there would be even more to come. Here they are! Not only are these great books for building phonemic awareness, but several of them have sequels that have similar structures and can be…

When a Student Finds It Hard to Blend Sounds Together: 6 Tips for Getting Over the Hump   While very often, things go along quite swimmingly in the Orton-Gillingham lesson plan, from time to time we all have a student that has particular difficulty blending sounds together. They know their letters and can correctly…